Early monasteries, of which our Nunnery is an example, followed a ground plan derived from that of the Roman villa, with the central colonnaded courtyard evolved into the gardens (cloisters). Cloister gardens of the period are set within rectangular bounds and often centered on a fountain, and were designed specifically to foster contemplation.

Monasteries had other gardens as well: kitchen gardens (hortus) for vegetables and seasonings, herb gardens (herbularius) for medicinal plants, and — at the west doors of many of the great churches — paradise gardens that produced flowers for decorating the church and also provided sanctuary to fugitives.

Over the last few years we have invested considerable time and money into recreating what use to be one of the most sophisiticated gardens of the valley – the garden of the St. Bonifacius Benedictine Nunnery.

Though lost and remodelled already in 18 and 19 hundreds, the final blow to the Monastery garden was dealed in 1950s and 60s, then the house and the grounds fell into a complete disrepair. 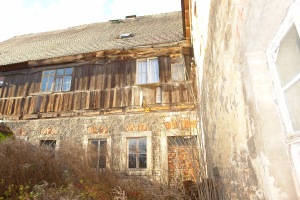 During the summer month of  2012 – 2011 more then 300 cubic tonnes of rubbish, waste and soil was excavated and removed. The old stone pavement was discovered, with fragments dating back to 18 and 17cc. 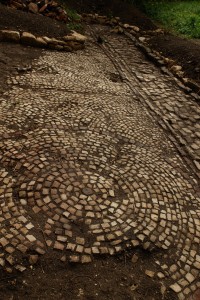 After careful restoration a new garden plan was implemented with the main emphasis on roses – traditional monastic plant, loaded with symbolism and religious significance.

The rose was sacred to a number of goddesses including Isis, whose rose appears in the late classical allegorical novel The Golden Ass as “the sweet Rose of reason and virtue” that saves the hero from his bewitched life in the form of a donkey.[1] The ancient Greeks and Romans identified the rose with the goddess of love, Aphrodite (Greek name) and Venus (Roman name).

In Rome a wild rose would be placed on the door of a room where secret or confidential matters were discussed. The phrase sub rosa, or “under the rose”, means to keep a secret — derived from this ancient Roman practice.

Christians used the red rose as a symbol of Jesus – his passion, martyrdom, and resurrection, as well as for Marys motherhood and purity. Mary is mostly linked with the white rose. The roses design also implies the liturgy. Wordsworth surrounds Mary  with brilliant roses:

In trellised shed with clustering roses gay,
And, Mary! Oft beside our blazing fire,
When yeas of wedded life were as a day
Whose current answers to the hearts desire. 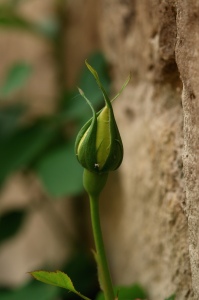 It seems that every opening bloom points to another wonderful person in the garden of humanity: Prophet Muhammad is also symbolised with a rose. Great Sufi mystics speak of how “His great personality illuminated the roses color, and his perfect morality is the source of its fragrant sense.”

Farid ad-Din Attar (d. 1230), one of the greatest Sufi mystic poets of all time, wrote in his The Rose Garden:

In the rose bed, mystery glows.
The secret is hidden in the rose.

Rumi wrote “That which God said to the rose, and caused it to laugh in full-blown beauty, He said to my heart, and made it a hundred times more beautiful.”